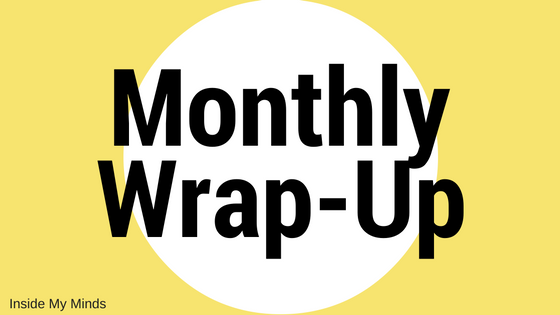 For the month of September, I read five books. The books that I read were all middle grade, however, one of them is a classic. I’m very satisfied with the amount of books I read.

Serafina and the Black Cloak by Robert Beatty 📖📖📖📖📖-I really enjoyed this book, and I especially loved Serafina as a character. Serafina pretty much kept to herself for the majority of the book, yet she still found a way to immerse herself in the culture of the Biltmore Estate. My favorite things about this book have to be the relationship that Serafina has with her father and the friendship with Braedan. This book was fast-paced, fun to read and mysterious.

Pinnacchia by Joy Findlay 📖📖📖-Synopsis from Goodreads:
“There once was a time called The Great Separation, an era where the extremely rich ruled the world from large mechanical floating cities, scattered across the sky and those who were poor lived ‘grounded’ on earth. The ‘grounded’ worked and strived for recognition through steam engineering, electrical inventions and the making of fantastical gadgets so they could be invited into cloud cities societies and join those who lived ‘cloud-side’.

It was during this era that the Earth’s most famous mechanical engineer and inventor designed and built the worlds first cloud city, Skylands. Once it was built, Lord Peto, through tragic loss decided to live ‘grounded’ in a small rustic community below this great city. His was a story of lost love and found faith and a vow to stay grounded for as long as he lived. But this is not his story. This story is of a young mechanical boy Lord Peto created, lost, then found again.”

This book is 48 pages, however, there is a lot packed into it. While I did enjoy this book, I felt that it was rushed. I also felt that some aspects were too similar to the story of Pinocchio. This is the first steampunk book that I read, and I am definitely intrigued to read more steampunk.

Mary Poppins by P.L. Travers 📖📖📖-I have always loved the movie, however, I like the book more. The book is more magical and enchanting, and Mary Poppins is more strict in the book. I felt that the chapters were more like short stories and didn’t flow well from one to the other. I would have loved if the chapters were more connected. Overall this was still fun to read.

Serafina and the Twisted Staff by Robert Beatty 📖📖📖📖-While I enjoyed this book, there was one thing that I feel this book lacked. This book didn’t have as much magic in it as the first one, however, it did have as much mystery as the first one. I love the growth and development of both Serafina and Braeden and I love how much their friendship has grown too. I also feel that Serafina has more freedom to roam around the estate. The most important aspect, in my opinion, is how Serafina found the balance between her life at Biltmore and her life in the forest.

Miss Peregrine’s Home for Peculiar Children 📖📖📖📖-This book had some creepy aspects to it, and I really enjoyed them. This book was definitely intriguing and fun to read. Jacob, the main character, at times, came across as a whiny brat, and I found that to be annoying. I did love how Jacob wanted to learn more about his grandfather. The photos were really interesting, and I felt that they added to the peculiarity of the book. I’m definitely excited to read the rest of the series.